Navigating the Sky Above the Clouds 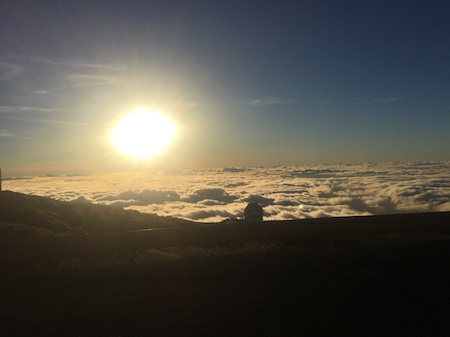 On August 14th, 2017, when I left the San José/ San Francisco Bay Area / Sacramento region of California to pursue a PhD research program in Astronomy in Turku Finland, studying under the supervision of Dr. Jari Kotilainen in Tuorla Observatory, I was thrilled about the opportunity to study AGN-host galaxy coevolution and AGN environments, but I did not think that within a month and a half of the move, I would be traveling with Kalle Karhunen, another student from our research team, to the Nordic Optical Telescope on the mountains of the La Palma island (Canary Islands, Spain). Within weeks, I was making travel arrangements by buses and planes to countries and cities I have never been to before. Already under extreme budget after large visa and moving costs, before for my first full paycheck date, I was not sure how this trip was going to be afforded, but with the generosity of my advisor, my travel partner, and University of Turku, I was granted an advance of 80%, and at the last minute the rest of the costs were also arranged.

The Nordic Optical Telescope provides a unique opportunity to people like me to operate independently the telescope without much supervision. I wanted to do my best. Grateful for this opportunity, I dedicated myself to studying the Nordic Optical Telescope website and other information sources to be able to manage the observing procedures. I got in touch with our Principal Investigator, Daniela Bettoni, and she shared with me information that she got from the telescope, including the name of the local support astronomer. She also provided to us target lists which included the coordinates and other pertinent information about astronomical objects we were going to observe. Of course, I got also guidance from Jari, and met multiple times with Kalle who has been there before and has been patiently answering my questions starting from hotel reservations to other details about the trip.

First part of the preparation was to understand what tasks the telescope performs during the night of observations. For example, besides taking the spectroscopic data of the targets, we need to take multiple calibration images. So I had to remember what I learned in my Observational Astronomy I (TÄHT5000) course and apply that knowledge to the specific goals of our project, so that I would understand each step in the procedure. Second part of the preparation was to learn the technical language of the telescope operation. I was reviewing (Unix for Mages by Joe Topjian) so that I could operate smoothly the command line environment of the computers in the Control room of the telescope. Third part of the preparation was to learn a lot of technical vocabulary. For example, here are many charts used during an observing run. The pointing charts are images of the sky from an archive which show how the sky looks like around your target. You use those after pointing the telescope to the coordinates to double check that the telescope is pointing at the correct patch of the sky. The visibility charts are a different type of diagram. They show many things, when the targets rise and fall, where is the moon compared to the targets on the sky, time, and other useful practical information. We used these primarily to decide in which sequence we would observe the targets. However, despite all of this preparation, I knew that our support astronomer (Anlaug Amanda Djupvik) would give us an initial introduction and I was praying to be able to retain everything on the fly. Often, when I would get nervous about performing well during the observing run, I would remember my great teachers and professors from my journey in academia/school/education and would feel a sense of reassurance.

I also had to consider the situation with the driving. I was the designated driver, however, I had just renewed my driver’s license, but fortunately the new card arrived before my trip. And fortunately the car rental company had an automatic car, as I did not have experience driving the stick. I was worried about driving in the mountains, so I asked about the driving conditions to my professors at the San José State University (Dr. Aaron Romanowsky and Dr. Elizabeth Mills) and to my professors at the Tuorla Observatory. Kari Nielson graciously gave me a Google Satellite tour of the road, and showed some cool places to stop to catch a breathtaking glimpse. To be honest, the first time I drove up to the telescope, my knees were shaking, but I tried to be composed because Kalle was with me, so I did not want him to worry. But very soon, I became comfortable and was no longer worried about falling of a cliff 🙂 Once, we even saw a quail family run in front of us.

The Nordic Optical Telescope has an open invitation to the observers who come in person to present their work. I contacted John Telting and he was able to arrange for my presentation about our research project the morning of the 1st observation run. Even though our research team has observed here before, I wanted to present and get feedback in my own words about this project as I will be contributing to it during my doctoral thesis research. I also wanted to share my excitement of the field with any students who might be interested in pursuing a PhD in astronomy (http://www.tng.iac.es/seminars/seminar.html?id=93).

So what is this project about? This project is about looking at the galaxies which host active galactic nuclei (AGN). Active galactic nuclei are supermassive black holes which accrete matter. They are extremely luminous and their radiation is not of stellar origin! We look at the galaxies around the AGN-host galaxies. Do AGN affect their companion galaxies? First, we have to use the spectroscopic data obtained with the ALFOSC instrument to calculate the redshifts of the companion galaxies to verify if they are truly close to the AGN. Next, we use these data to look at the star formation rates in companion galaxies. Furthermore, we orient the slits in a way to not only capture the spectrum of the companion galaxies, but also to capture the off-center part of the extended AGN-host galaxies, which will allow us to characterize those galaxies which contain an active nucleus in their centers. We then compare what we learn to the inactive galaxies.

Since we need to obtain spectroscopy, the exposure times are high per target. We planned to take 3 exposures of 1800 seconds per each target. Plus, we needed also to observe appropriate standard stars. We observed about 10 targets during 3 nights. Partially it was due to the fact that we had to observe several times a TOO, a target of opportunity. Especially on the last night, we got a call, where an astronomer (Daniele Malesani, Københavns Universitet in Denmark) from another research program was “chasing” a gamma ray burst. We had to interrupt our observations and help him observe his target. This resulted in notices 22029 (https://gcn.gsfc.nasa.gov/gcn3/22029.gcn3), 22039 (https://gcn.gsfc.nasa.gov/gcn3/22039.gcn3) in the GCN Circular (Gamma-ray Coordinates Network).

I was really inspired by the trip. It was amazing. The island was amazing. Even though I dedicated my time to my work, I hope to come back as a tourist and enjoy the picturesque streets, the island ambiance, and the warm ocean sand, as well as local delicacies. I hope to come back to learn more about observing as a Student Assistant. Nordic Optical Telescope is located on a mountaintop which is actually a telescope hub. There are numerous telescopes of various kinds and there are astronomers from all over the world. You get used to not sleeping at night, especially because Kalle was with me, it was easier. Plus, there is coffee. I think we had a successful run. I used the knowledge couple of weeks later during our NOT remote observing course, this time both with ALFOSC and NOTCAM. I am deeply thankful to Jari who decided to give me this task of running the observation, to Kalle for his constant support, and to the funding agencies to making it possible through their financial support. Of course, big thanks to my wonderful husband for supporting my crazy career choice.

I also would like to note that I really enjoyed reading the website/blog articles by Dr. Rami Rekola (http://www.astro.utu.fi/~rareko/LaPalmaEng.html) who traveled there some time ago. I could relate to his story about the adventurous trajectory between planes, running through airports, etc. To get to the Observatory, I first took a bus from my home in Ilpoinen to the Cathedral in downtown. Their I took a long distance bus to Helsinki Airport. From that airport, I took FINNAIR to Stockholm, where I had 25 minutes to change the plane to Madrid, Spain. Originally, to save money, I wanted to sleep in the Madrid airport, as my layover was more than 10 hours. But the airport got deserted and I got worried, so I took the local train to the Madrid center. There, I found a cheap hostel and stayed there until the next morning. The next morning I walked to the metro station along some long old street, and found my way back to Madrid airport. Then I boarded another 4-hour long flight to La Palma Airport. There I met Kalle who flew through Berlin to another island to La Palma. Then we rented a car and drove to the hotel by the sea. We spent the night there and the next morning after my presentation, we drove up the mountainous road to the Residencia. After catching some food and checking in, we continued driving even further up to the Nordic Optical Telescope where we met our support astronomer Amanda and the telescope itself!

You are truly there above the clouds. You see the clouds float in the horizon, and the sun setting into that ocean of clouds. The starry night sky is mesmerizing. Plus, you have to run to the top and close the side ports or open them during the night. The bathroom is outside, so you have to run out to go to the bathroom. But there are no mountain lions like in California.

I also learned about the local history and culture, and the significance in history of the Canary Islands. That’s where you can find the replica of Santa Maria ship, the vessel that carried Columbus to the beaches of the new land later known as America. Incidentally, I also learned how much vocabulary is shared between the sea navigation and the navigation of the sky with a telescope. For example, we use a guiding star, coordinates, hatches, and angles. We also use the word “slew” to mean “turning or moving the telescope or the ship’s spar around a certain point” (https://www.merriam-webster.com/dictionary/slew). Both activities also require constant monitoring of the weather 🙂

I recommend to anyone to visit the observatories and the island. There are many things to do and you can also practice some of your Spanish knowledge. And if you are an astronomer student observing, you will get to navigate on your own the sky above the clouds!

Some pictures that I took during the trip